Whether you or I like it or not, advertising is everywhere. All you have to do is turn on the TV and you're being sold a 3-piece blender, open a magazine or take a drive through the city for 101 reasons on why to order that Big Mac we both know you want. The biggest, "Pick me!" Era is upon us as more businesses are trying their hardest to get in front of your eyes.

The question for many companies has been how can I make sure that my ads are being seen?

This article will give you the juice on what viewability display online advertising is, why it’s important and how it works. It'll also explain the different factors that determine whether or not an ad gets counted as “viewable.”

What is Ad Viewability?

Well as you've probably guessed already but ad viewability definition is simply a metric simply used to measure how often a user sees an ad.

You can do this in several ways. But the most common way of measuring viewability is by using the number of impressions considered “viewable” out of all the impressions delivered to a user.

The viewability of ads is important because it’s one of the factors used to determine how effective an ad actually is.

Struggling to get the ad seen means struggling to create an impact on a person who could be viewing it -  and that's wasted money, my friend.

How Does It Work?

You've probably seen but never took too much notice of it but viewability display online advertising works by placing a code, or pixel, on an advertiser's website. This code then creates a "cookie" placed on the user's computer.

Once the ad has been served to the user, the cookie will determine whether or not it was seen.

How to Measure Viewability Rates?

There are two ways to measure whether or not an ad is seen: 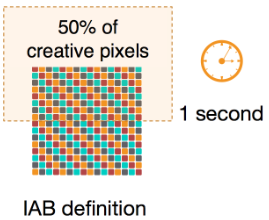 This is where viewable impressions come into play which is whether an advert was seen with a set of eyes rather than being out of view. These allow you to have measurable impressions to work when diving into digital advertising so you can see if your investment is truly worth it based on an average viewability score.

What Causes Ads to Be Most Viewable?

Many factors determine whether or not an ad is counted as "viewable." Some of these include:

What Does This Mean for Advertisers?

Now that you understand what viewability display online advertising is, it's important to know how it can help your business.

What Causes Ads Not to Be Viewable?

Though unfortunate, there's a couple of factors that could lead to an ad not being counted as "viewable."

Some of these include:

Non-human or Bot Traffic to Websites

An issue that causes an ad not to be viewable is bot impressions or non-human traffic. They can falsify traffic and even click-through rates (rude).

Ad blockers are another huge problem for advertisers because they stop your ads from appearing when someone hops online to browse the web. They work by blocking out ads when someone browses the internet.

That means that they won't be able to see your ad in their browser or on any websites they visit. In addition, these tools can block an entire page or just part of it.

Ad is Not Above the Fold

Another thing that causes ads not to be viewable is when the ad is below or close to being below the fold.

The "fold" is where a user's content begins, so anything underneath it isn't visible until you scroll down. That can lead to wasted ad spending because users won't get past your website unless interested so make sure to make technical adjustments so your hard work is seen. 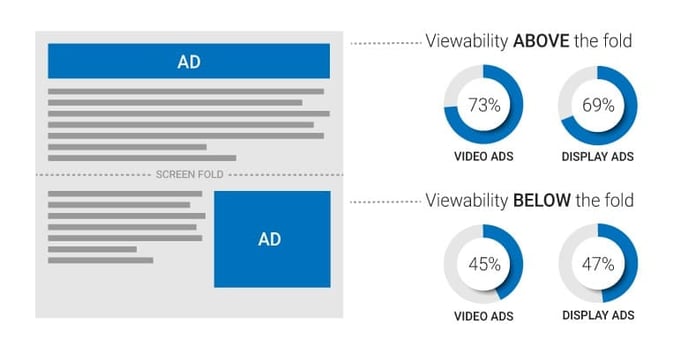 Another thing that can cause an ad not to be viewable is if it was only on the page for a short amount of time.

If your ads are below or close to being below the fold, you might want to increase their duration, so they're more likely to be seen by users.

How to Improve Ad Viewability

An average publisher's viewability rate is 57%, meaning that 43% of all ad views are wasted and go unseen by people who visit your site!

Frustrating to say the least, eh? Well before you let these woes wear you down, we've got a few tips to try out:

The majority of online activity is now happening on mobile, so it's wise to make sure you're optimising your ads for all devices, not just desktops and laptops.

Get rid of the 320×50 units and use a taller banner, such as the 320×100 units. This works best for mobile devices as they're closer to being in line with how people view content on their phones or tablets. It's all about a seamless experience - how can you make it easier for your target audience to have eyes on your ad?

You can optimise your placement by following different screen sizes - this will show up better across all device types. Google Analytics provides info about what type/size device is most popular among visitors so you can optimise your mobile display ads.

The 150-pixel rule is a great way to prevent accidental clicks and improve user experience. To start, try using this distance between ads and content on your webpage.

If it doesn’t work for you, then move them away by adding some space or padding as needed.

Poor page load time is one of several reasons why most ad efforts fail. In addition, if the user doesn't have a speedy internet connection and is bounced off the site before seeing anything, their viewability score will also suffer.

But for example, you can optimise resource loading so it won’t take up all your users' bandwidth or affect other aspects of marketing campaigns like dwell time (how long people spend on pages).

Remove All Pop-Ups and Exit Pops

Exit pops, or those little boxes that show up when you try to leave a website, are one of the biggest offenders when it comes to destroying the user experience.

Not only do they block access to the content people are trying to view, but they're also often used as an attempt at getting users to sign up for a subscription or download something.

You can also use a JavaScript-based solution, such as L.E.A.N.'s Ad Viewability Tracking Software, to eliminate popups on your site so users won't accidentally click them while trying to close it out.

Test Different Placements and Times of Day and Week

When it comes to viewability, there are no one-size-fits-all solutions. What works for one advertiser might not work for another.

That's why it's essential to test different placements, times of day and weeks to see what produces the best results.

You can also use a tool like Facebook's Ad Manager for an analysis on user behaviour to help you understand how your ads are performing.

Use a Third-Party Service

If you want to make sure that you're getting the most accurate viewability data possible, we'd recommend using a third-party service.

Using a vendor that specialises in measuring viewability helps cut through the nonsense of bot-views and relying on potentially inaccurate data from the ad networks themselves. The right third party should update you about your best ad formats, highest-ranking audience as well as placements.

We'd suggest Moat by Oracle, DoubleVerify and Integral Ad Science to name a few! But, there's a bunch out there so go for a dig before settling on just one.

Features to Look for in Ad Viewability Vendor

When looking for a viewability vendor, there are several things you should keep in mind:

The first is that not all vendors are created equal - some provide more accurate data than others. An ad vendor should also have a good understanding of how the viewability metric is calculated and what affects it.

Additionally, they should help you understand how to improve your viewability score and which optimisations will work best for your business.

Ensure the vendor offers a transparent reporting system that's easy to understand. You'll want to see how your ads are performing on a granular level.

The vendor should offer 24/7 support if you have any questions or run into any problems.

You should also look for a vendor that offers:

Finally, make sure that the vendor is up to date with all the latest industry standards and changes and has experience working with different ad formats.

What is Contextual Advertising? Your Guide to Getting Started Today!

How to Determine the Average CPC for Display Ads