There’s Never Been a Pixel This Big

When rumours surfaced that Google was working on a new phone, most of us were dubious. I mean, the last time Google had given phones a go, they came out with the Nexus. And, really, who even owns a Nexus? Tech heads and… well even a lot of tech heads weren’t that smitten with the Nexus. Then last month, ads started appearing on our Facebook feeds. An empty search box slowly morphed into a phone in one of advertising’s most blatant metaphors. Google is more than a search tool. Yeah, okay. Sure. I mean, Chromecast is great, don’t get us wrong. But after Nexus (and let’s not even start on Google Glass), consumers were suspicious.

It seemed a weird gamble to be making. Google’s been around for a whopping EIGHTEEN YEARS and it’s been killing it on the software front. It is undoubtedly THE search engine (unless you’re messing around on the dark web) and has a very healthy revenue from their ad services and various other interests. So why change? Sure, Google has the money to spare and can afford to take risks – with $70 million in ad revenue, they can take as many risks as they want, really. But if you’re making that much money and have so many stakeholders to take care of, why risk it at all? You’re doing just fine as it is, right? Taking control of all the elements in the supply chain means a lot more work and a lot more opportunity for something to go wrong. And breaking into a field so thoroughly dominated by Apple and Samsung is no easy task. 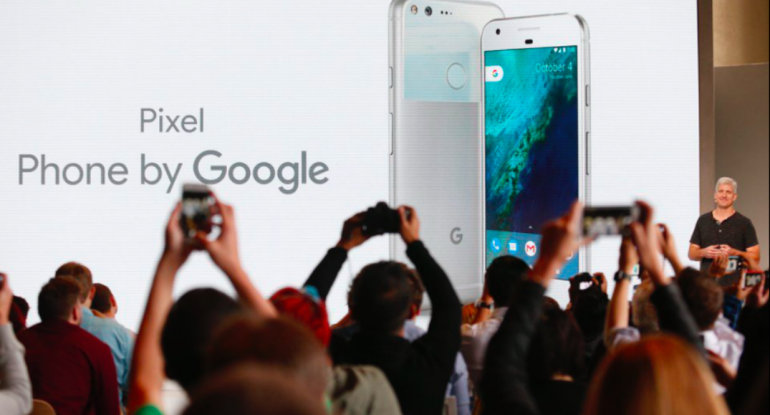 But Google didn’t want to be defined by a tiny little search bar anymore. It had its eyes set on something bigger – total world domination. And this time, their new hardware release went very well indeed.

Last Tuesday, Google unveiled its brand new moneymaker, Pixel. And boy, is it a step up.

The phone is extra special because it marks Google’s first *real* entry into the hardware game. Nexus was built by a third party and while the manufacturing of the Pixel is actually done in HTC’s factories, the phone is completely Google-branded and designed.

One of the key differences this time is that, instead of divvying up its hardware needs between a bunch of unrelated company divisions, Google now has a central strategy. Last April, Google hired ex-Motorola man Rick Osterloh as its head of hardware and today, all hardware products come from Osterloh’s jurisdiction. Not only does everything look like it comes from the same family, but there’s a far great cohesiveness of purpose too – super important when you’re trying to change your brand identity to reflect a new direction.

Actually, Google’s done a pretty brilliant job of creating this brand identity. Their advertising for Pixel is spot on. Their ads so far have been light, amusing and tongue-in-cheek (see above video for a well-aimed headphone jack volley), and they’ve even given the phones jokey colour names like ‘Very Silver’, ‘Quite Black’ and ‘Really Blue’ – another subtle jab at competitors with their ‘Continuously Black’ Jet Blacks and Pink Twilights (iPhone and Samsung Galaxy respectively).

The message is clear: Google’s latest products are fun, crazy advanced and unpretentious. From an advertising point of view, Google is killing it at communicating their brand personality and most importantly, their brand’s unique selling points. A brand personality we haven’t quite seen in the mainstream until this week.

Plus, it’s not just the phone – Google’s also unveiled an entire interconnected hardware ecosystem, which also includes its Daydream VR headset and Google Home. Home consists of an intelligent speaker, Wi-FI router and media-streaming dongle combo and turns your house into something out of Her. You’re probably going to fall in love with it too.

The message is clear: Google is no longer just a search engine; it’s a source of information for, and a means to access literally EVERYTHING.

A Guide to Buyer Persona Development: Why Is It Important?

Buyer Personas and Audiences: How to focus your Marketing

Speak to Your Target Audience: 10 Steps for Creating Buyer Personas

The Next Best Thing in Digital: Conversational Marketing 101