Google and news media are going to war over how the Google algorithm shows news content. What might the new 'mandatory code' mean for the rest of us?

If you’re anything like me, you may have been a bit taken aback if you jumped on Google on the 17th of August and were met with news that the (digital) sky was falling. In an open letter, linked to from the Google homepage, Mel Silva, MD of Google Australia and speaking on their behalf, had issued a warning to all Australians that the government was in the process of passing a law that would directly affect our ability to search on the internet. Heavy stuff, given I was only there to look up a recipe for chicken soup. We’re obviously no strangers to working with SEO and the rules that anyone who wants to work with Google needs to play by, so consider our interest piqued. 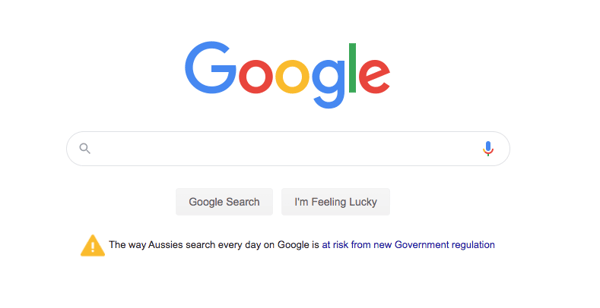 After digging a little deeper, it became clear that Google’s letter was a response to planned legislation from the Government on behalf of the News/Media industry - plans have been simmering behind closed doors for a few months now. The dispute between Google and the news media industry has the potential to change how all of us are able to use the internet to answer our questions and interact with the news cycle from here on out; which given my personal reliance on Google for everything from professional research to delicious chicken-based soup recipes, is a worry.

As such you’re like me and your first instinct upon hearing about breaking news is to give it a Google, then let me break it down for you.

For a while now, there have been discussions around the world with regards to whether or not Google should be paying news media businesses for the right to share the news articles they write. These publications believe that the quality of their writing encourages people to use digital platforms such as Google, Facebook and others to access their content, and therefore they deserve payment. Google disagrees, claiming that their service simply directs users back to the news site, and that they shouldn’t have to pay in order to direct users to the news media content.

Earlier this year, the Australian Government directed the ACCC (Australian Competition and Consumer Commission) to develop a ‘Mandatory Code’ that digital platforms and news agencies will need to agree to in order for services such as Google to be allowed to share content written by news media businesses such as News Corp. A draft of this Mandatory Code was publicly released for public consultation on 31st July.

On the 17th of August, Google (via Mel Silva) responded with their open letter, declaring the risks they see with pursuing a code that necessitates that they pay for the privilege of hosting links to news media articles. Sufficed to say, Google certainly sounds concerned. Why might that be?

In (extreme) brief, there are a few things that the Mandatory Code would require Google to do that they are super not into. Some of the big stipulations are;

As I said, Google is… not a fan. For one, they’ve always been protective of their algorithm, believing that if people knew the specifics of how it worked, it would be  too easy to game the system and artificially affect rankings. As such, the best marketers can do is guess what Google is going to respond best to. Similarly, they have no interest in sharing the data they collect on how users interact with their site, an opinion shared by basically anyone who is in the industry of collecting data.

Google believes that the best outcome for everyone is if content begins on a level playing field, and quality content is rewarded with the views, regardless of who created it (though it’d be a lot easier if they felt like sharing what they consider ‘quality’). This means that small businesses or individuals have the same chance at capturing a click as everyone else (assuming you ignore domain authority, which already addresses the authority gained from consistently posting quality content). This is a major thrust of their open letter - ‘don’t let news media companies dictate the ‘correct’ source of news; let the quality of the article speak for itself’. This also speaks to Google’s long held value of personalised responses - their constant drive to provide content relevant to the searcher goes out the window when someone can just purchase the top result.

For the rest of us bystanders however, the more worrying alternative is Google taking their ball and going home. Historically, when Google is faced with similar circumstances, their tactic is to simply stop doing whatever it was that they’re now being charged to do. As major as the Australian news industry may be to Australians, Google has simply shut off its ‘Google News’ service in the past, rather than be forced to pay for it. For consumers, that means that the only results returned from our googling of current events would be from independent sources - not ideal for us, or for Google's perceived quality.

As far as they’re concerned, Google is already of significant help to news media services, providing “billions” of clicks and “millions of dollars” as is. They’ve even claimed that they’ve offered to pay more in order to license content. That said, apparently the news media industry is hungry for more.

The News Media's Side

On the flip side of the coin, we have the news media businesses, spearheaded by NewsCorp.

From the perspective of the news media industry, Google and their digital platform competitors should pay for the right to share and host content written by journalists employed by news media businesses. In their opinion, digital platforms are increasingly becoming where people turn to when they want to find up to date news (which they’re not wrong about), and that news media outlets delivering that content deserve a piece of the advertising pie for those search result pages. It is the belief of the news media industry that “News content brings significant benefits to the digital platforms, far beyond the limited direct revenue generated from advertising shown against a news item. News media businesses should be paid a fair amount in return for these benefits.”

The Mandatory Code currently drafted is definitely tailored to improving conditions for the news media industry, from allowing them to ensure their place at the top of the page rankings, additional user data and more, but there are also some other benefits that are designed to “address the imbalance of power” between their businesses and the world’s biggest business. One such provision is the ability for smaller businesses to work together to improve their bargaining power against the might of Google. As an example, one consortium of 88 smaller media businesses submitted a joint recommendation to the ACCC during the development of the code.

When it comes to the financial impact, the news media industry reassures that they  won’t be going for the throat, claiming “the arbitrator is also required to consider whether the payment proposals from news media businesses place an undue financial burden on the digital platforms,” (boy do I want to know what Google, one of the highest earning companies in the world, would consider “undue financial burden”).

The ACCC has also responded to Google's open letter, and claimed that it "contains misinformation", specifically noting that "Google will not be required to charge Australians for the use of its free services" and that "Google will not be required to share any additional user data with Australian news businesses unless it chooses to do so.". Beyond those claims however, their response is light on detail.

So where do we sit as users of Google and the internet in general?

While we can see where the news media industry is coming from (kind of), their expectation that they should be able to pay for priority rankings on Google is the antithesis of what we all should want from a company like Google. While there is an argument to be made that journalist-written and edited content is more useful than the alternative, it should be able to stand on its own.

This is expounded by the fact that Google isn’t taking the rights to the news published by others, or republishing on its own service - it simply provides a method of access to the content. This isn’t a right that news media sites deserve - it is literally the service that Google provides. If you’d expect anyone to charge for the service it would be Google (and thank god they don’t).

Google’s not wrong, if the ACCC enforces their mandatory code then the quality of Google as a service is almost definitely going to decline, whether it’s through the restriction of content we can access based on who can pay, or whether it’s because Google decides not to play ball and chooses to avoid paying by refusing to show content.

If you’re someone who has ever googled a current event (like say perhaps that little global pandemic that’s been going around), then you should be concerned.

Well, Google has officially fired back at the ACCC now, and promised there’s more to follow. Expect to hear more from Facebook, the other named ‘digital platform’ affected by this mandatory code before too long.

In terms of the current draft mandatory code, the ACCC is accepting responses from the public until August 28th, so now’s the time to add your voice to the chorus. You can respond by emailing the ACCC here.

Otherwise, pull up a chair and grab some popcorn - there’s nothing like watching two corporate titans duke it out over the way we live our lives. While you wait for that to happen, perhaps make sure your own SEO is up to scratch so that you can do what the news media can't and rank high for free. Start with our Pillar Content Strategy Guide, linked below.

How Neighbourhood does Hubspot Onboarding

Google is Killing Third Party Cookies - What That Means for Marketers

Unless you've been living under a rock, I'm sure you've been made aware of Google's decision to make a fairly monumental change to its Chrome ...
read

Long story short - Google Chrome's doing the spring cleaning early - and video ads in short-form videos are next for the digital dustpan and brush. ...
read
What’s next?
Meet the Neighbourhood crew
THIS WAY