Holistic reporting that was simple to use and analyse

SwitchDin gave Neighbourhood a buzz after realising the opportunity HubSpot presented them; a completely streamlined sales process ... within reach! Eager to start utilising the platform more efficiently, SwitchDin envisioned scrapping the inconsistencies of ad-hoc processes, implementing a thorough sales pipeline so their team weren't just on the same chapter, but on the same page for every deal.

Having gone so long without a clear cut sales process or fine-tuned data management, it was difficult to get visibility (let alone reporting functionality) on deals flowing in and out of the business - meaning that the team were driving blind into past, current and future deals.

SwitchDin understood their USP and which facets of their business attracted new customers, all they need was a spark to start integrating that through their sales strategy too. We recognised that this inspired action would come from having reporting visibility on granular data within the SwitchDin ecosystem, so that SwitchDin could deliver an optimum service throughout the Attract, Engage and Delight stages of their customer journey.

An open playing field presented itself - the readiness of SwitchDin paired with their proactivity of introducing HubSpot to optimise their sales pipeline meant one foot was in the door. However, SwitchDin's rudimentary sales process or reporting functionality effectively enabled us to recreate these processes from scratch.

Making sure all switches were turned on, Neighbourhood explored the intricacies alongside SwitchDin throughout multiple sales pipeline workshops. While normally we're able to tackle a sales pipeline workshop in one hit, the detail required in the process including 4 gates for sign off on deals, meant that multiple workshops were required. These workshops helped us best understand what metrics mattered to the client, the current process at play, and exactly how HubSpot could be used to their advantage - both for staff and reporting.

Doing so allowed us to wireframe a strategy within Miro so we could implement it inside HubSpot. The collaborative involvement of SwitchDin meant we could fine-tune the process to make an effortless sales and reporting experience for staff by identifying where automation and notifications were internally applicable.

Ensuring SwitchDin got the most from HubSpot, integrations were introduced to make the collection and reporting of deals in-house seamless and easy to view. Accountability and consistency meant each team member were now on the same page with every client along their journey.

With sophisticated processes and automations planned and approved, we implemented 2 new pipelines within HubSpot backed by Zapier and Databox integrations that included a reporting 'wishlist' from the kick-off with SwitchDin. This was wrapped up by offering thorough training to the SwitchDin team so they could begin making the most of their HubSpot investment by giving their team visibility and consistency in deals.

During our exploratory phase with SwitchDin, it was noted that there was a varying level of HubSpot usage within the sales pipeline meaning every customer was being dealt with differently, lacking consistency in the customer journey.

The team were getting by with ad-hoc processes, leading us to create two new pipelines from scratch.  One for larger ticket electricity providers on a direct business-to-business approach, with another for intermediary businesses - each having different levels of involvement required from staff. An example being an automated email to the Executive Sponsor or Technical Lead to review information for permission to prepare the bid for a  deal based on an analysis of the opportunity - essential staff are notified when necessary, rather than spread thin across several stages.

An opportunity presented itself for us to automate the deal process through a Zapier and Google Drive integration in both pipelines, cutting admin time involved with collating essential deal information and allowing the sales team to spend more time on the documentation that mattered.

Once a new deal is created and the "Google Drive Automation" property is ticked, Zapier triggers a new deal folder which clones a Deal Zip File template featuring Google Sheet documents that are essential in developing their RFPs and proposals. This folder becomes the one-stop shop for a selected salesperson to keep track of what is yet to be completed to progress the client forward. 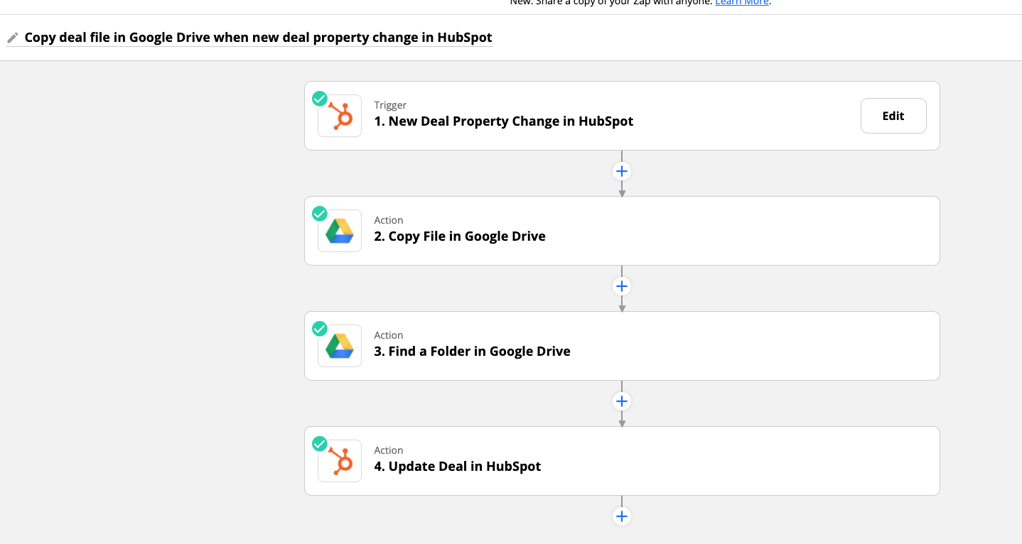 In both pipelines, each stage features an automated series of tasks for the deal owner which includes a checklist. This is where consistency meets efficiency with every team member now receiving the same requests needed from clients to qualify them into the WON stage.

Lack of processes meant there was an inability to identify bottlenecks within the sales process and it was identified early that little to no data was being captured consistently in the sales process, which is where the Databox integration came into play. Executives now have unseen finite data, offering a holistic view of deals flowing in and out of SwitchDin. Establishing a sales, marketing, customer support and service dashboard integrated into HubSpot allowed SwitchDin to pivot through areas of required growth in their sales process, ultimately servicing customers more efficiently.

We first set up dummy dashboards with dummy data (as seen below) using the reporting wishlist provided in the kickoff, before gaining approval of the dashboards and moving into implementation. 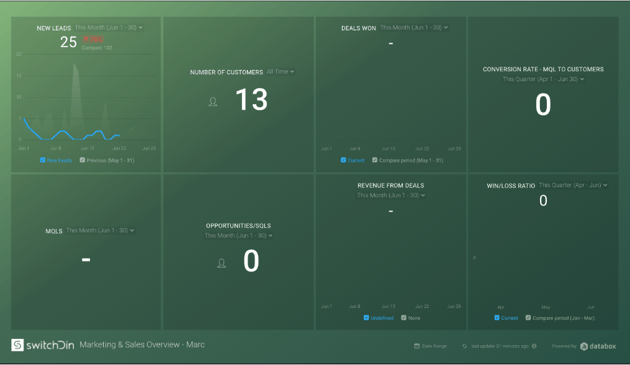 With the fine-tuned vehicle pieced together, the final stage was equipping the SwitchDin team with the processes created to drive it home. We set-up 3 training sessions: 2 with the project lead for SwitchDin, which covered how to utilise HubSpot effectively and the tools designed for SwitchDin, enabling him with the knowledge to teach his team on the developed sales processes in case of new starters and to give him the ability to optimise the process in the future. Then, a final workshop for the sales team and some execs on the Sales Hub tools they could utilise to make their selling experience an efficient one.

SwitchDin was an ever-evolving project that as greater functionality was offered, optimisation opportunities presented themselves to streamline their sales team processes and reporting capabilities. This was supported by HubSpot training, ensuring they understood their toolkit now available.

As well, with a 153% increase in team activity logged SwitchDin could grasp their teams output by understanding their input. Now, essential contacts and where they sit in their journey no longer fell between the cracks due to visibility on tasks and interactions between customers. 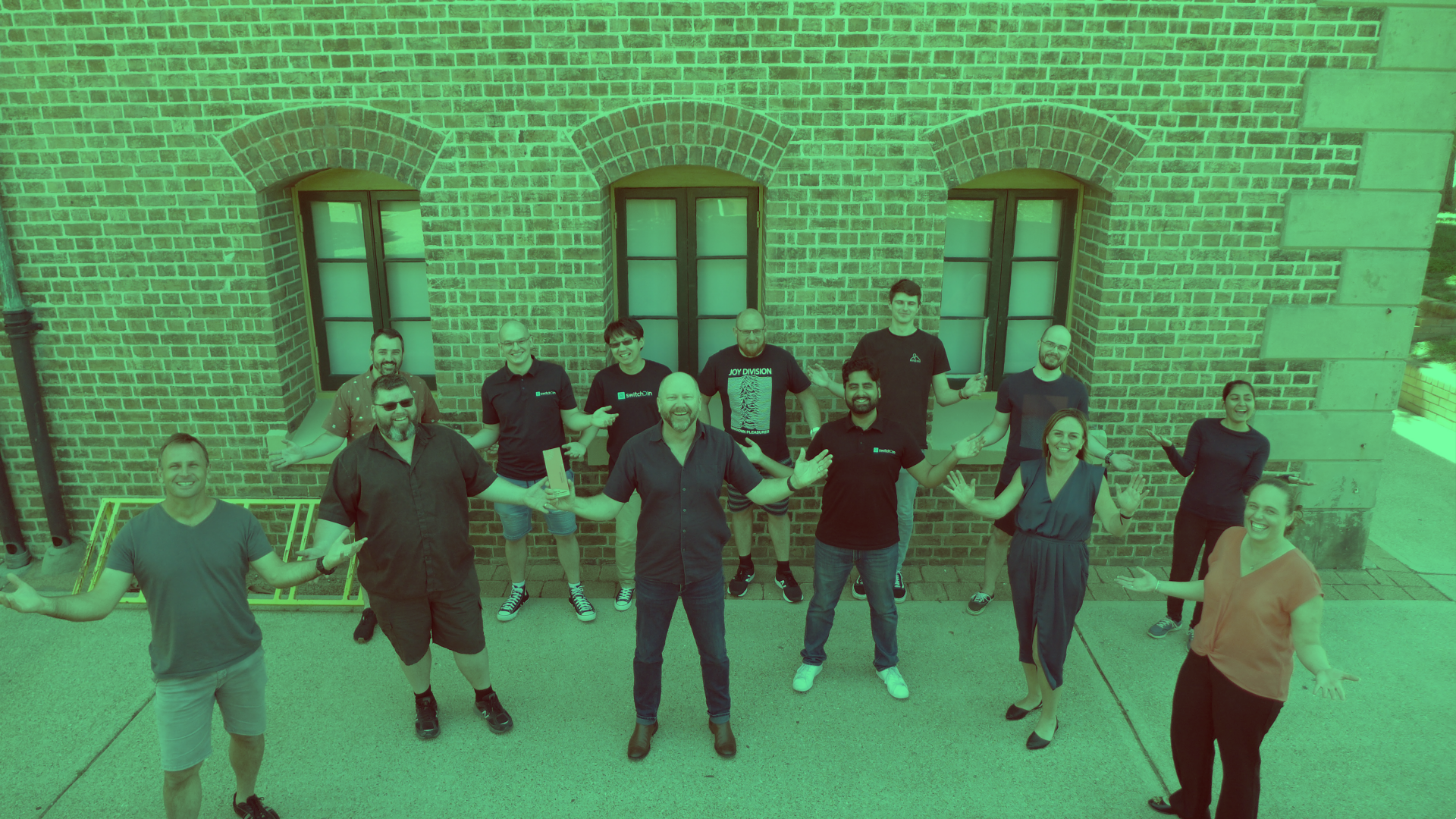 "I've had engagement with other agencies in the past and I would rate Neighbourhood as one of the best experiences I've had with a marketing agency. The quality of the support, the advice that was given, the professionalism as well but also the communication ... we tackled some pretty heavy problems but we managed to over come them. It also exposed us to some tools we weren't familiar with."
MARCELO CARVALHO
SWITCHDIN

It was a project filled with learnings and ongoing optimisation, even during the implementation phase we were considering ways to optimise or improve the process. Marcelo from SwitchDin really took the project with two hands and made it his own so we're more than confident that he's got what it takes to continually improve the process for his team and pull reports for the exec team at a moments notice. SwitchDin are on a trajectory of rapid growth so we're expecting big things from them in the future. Keep an eye out for when we next work together as this won't be the last time you see Neighbourhood x SwitchDin.

True Pride is a personal insurance firm that provides personalised advice on insurance in a uniquely human, personable way. We helped them automate their sales process to grow more efficiently. 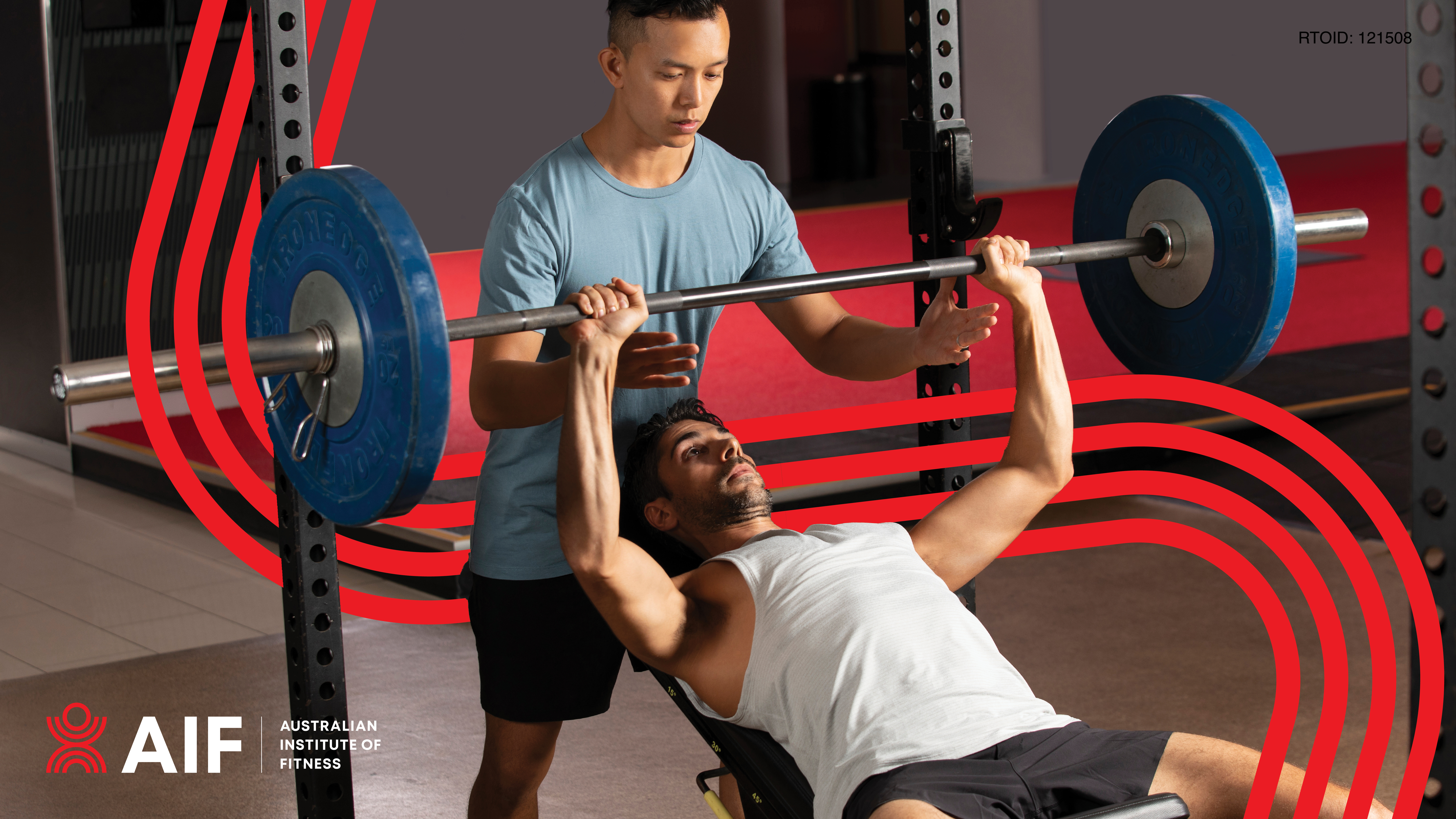 The Australian Institute of Fitness (AIF) is the largest fitness training organisation in Australia with courses developed by industry experts, delivered by experienced, qualified educators and supported by the most recognised fitness partners nationwide. Adopting HubSpot in their infancy, they sought Neighbourhood's help in utilising its features for maximum internal efficiency and optimising their sales cycle to encourage a smoother transition between marketing and sales.