The Australian Tourism Data Warehouse (ATDW) is Australia's national platform for digital tourism marketing in Australia storing over 50,000 tourism listings. Eager to optimise internal processes and collate over 20 years worth of data from several platforms into a single platform, ATDW submitted an RFP for an agency to help them build a CRM solution to their data woes.

Having holistic reporting functionality across their marketing and operations

01
A CRM that was accessible for multiple stakeholders with important information partitioned and permissioned, featuring seamless reporting functionality to save time from multiple softwares
02

A system that allowed for the detailed information infrastructure in use internally, including custom objects, properties and associations

Looking internally to try and optimise their efforts as an organisation, ATDW established that a systems review and overhaul was needed to make the most out of their internal assets. They began a systems overhaul across multiple projects, actioning major changes in important aspects of their digital infrastructure including a new CRM, significantly improved reporting, revised API functionality, marketing software and more.

Realising the work at hand, ATDW put out an RFP online seeking an agency that was knowledgeable and committed to best practice thinking in executing the planning and implementation of required systems. Neighbourhood managed to be in the 'hood at the right time to offer exactly that solution.

ATDW was wanting to create a powerhouse of a CRM that could relay the right information to the right stakeholders, at the right time.

THE CRM
Initially establishing a Hubspot portal setup, Neighbourhood set up essential platform settings, basic technical requirements and integrations such as mail, messaging and analytical services. With step zero complete, Neighbourhood conducted a workshop with ATDW to define data breakdown and mapping within Hubspot to identify essential information pathways. This featured the development of Properties and Custom Objects and how they would communicate with the ATDW Online Platform (ATDW-O), as well as documenting the API flow between systems - a more difficult than usual task given that the ATDW software prioritised Companies & Listings (a Custom Object in Hubspot) over contacts, with almost no data saved against the individual. 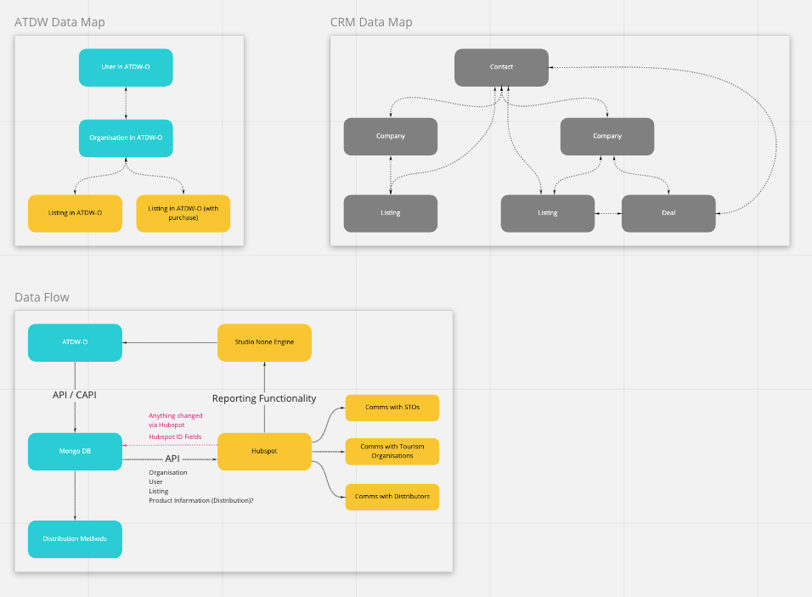 As for marketing tools, Neighbourhood developed best practice tools throughout Hubspot; from calls-to-action to form submission landing pages. The goal was to provide a consistently branded experience when engaging with stakeholders, defined by high quality, effective tools and templates. 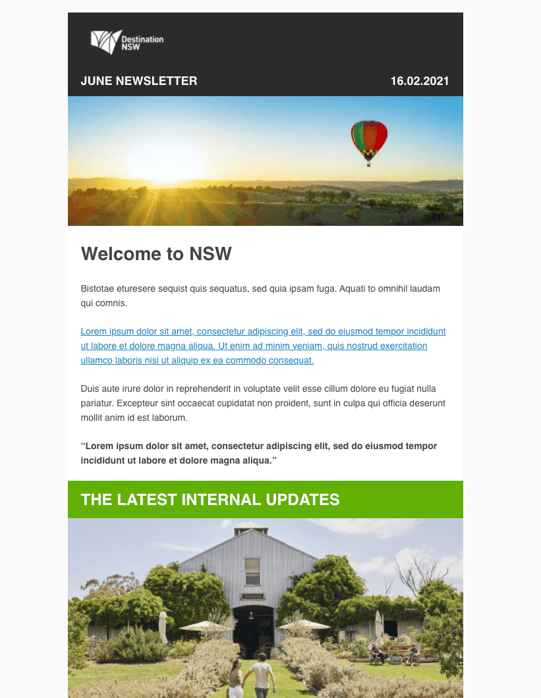 DATA
Data migration from the ATDW-O platform to Hubspot meant that the most important data could now be found and accessed on a single platform. This allowed Neighbourhood to implement significant segmentation within the database, allowing ATDW to leverage it for marketing outreach and reporting as needed.

ONBOARDING
Software is only as effective as the people that use it, so the next step was training. Neighbourhood conducted 3 major Hubspot training sessions covering all of the Marketing, Sales and Service tools at ATDW's disposal. This training was attended by representatives from all 9 stakeholder organisations (STOs), and supported with documented physical guides to using Hubspot effectively.

REPORTING
Finally, one of the major outcomes that ATDW was excited about thanks to Hubspot was access to intuitive customised reporting. The original process was cumbersome and reliant on multiple softwares - as such the development of easily accessible reporting within Hubspot via partitioned dashboards was a major highlight. 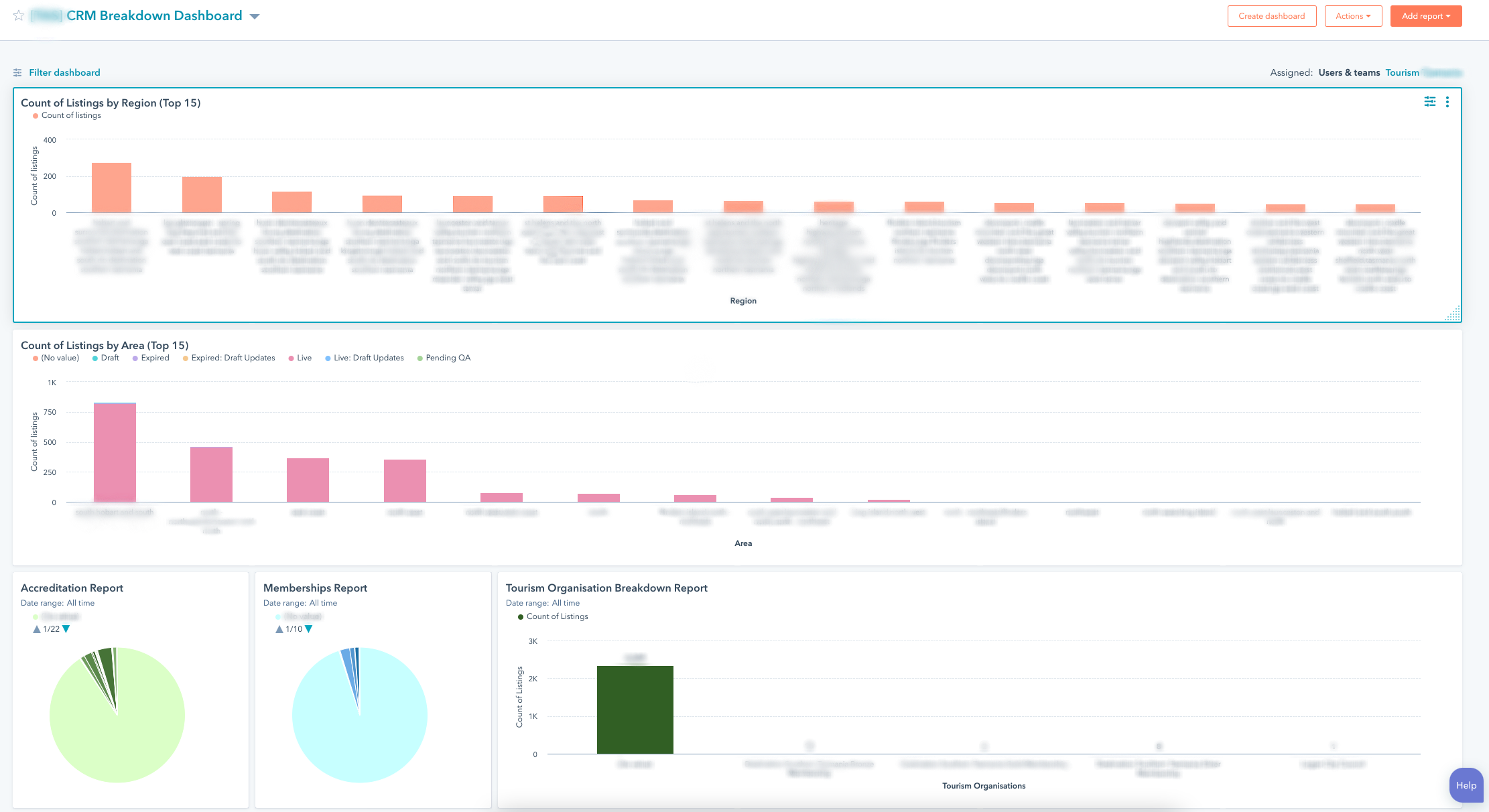 With a strong foundation established, paired with ongoing training in the platform, Neighbourhood worked to develop and optimise marketing and sales tools to best connect with ATDW's customers and ease operational processes.

UTILISING THE CRM TO IMPROVE SUPPORT AND LEAD GEN
Gradually, efficient utilisation of the CRM meant ATDW had a detailed information infrastructure it could depend on with the automation tool able to send emails, reflect data changes and produce detailed status reports for the STOs. To gain a holistic view on the performance of these tools, as well as to better understand customer sentiments in general, Neighbourhood developed Service Hub's NPS tools and fleshed out the opportunities for use within the new system.

This was also an opportunity to optimise ATDW's conversion rates (or more accurately, the conversions rates of the tourism organisations that were ATDW's customer base). Conversion optimisation tests were introduced within scheduled periods alongside Google Optimize to compile results and offer recommendations for areas of improvement. This was supported long-term by the development of a guide for Operators moving forwards, detailing Neighbourhood's recommendations for best-in-class CRO.

Next, Neighbourhood strategised content for STOs to attract and convert new operators and distributors, taking the form of an eBook providing internal guidance for marketing and content development.

Managing this audience came through the creation of chatflows to provide round-the-clock responsiveness on ATDW's online platform, improving CRO for listing signups and easing the load on the staff required to assess listing quality and validity. To further improve ATDW's customer experience, Neighbourhood implemented support ticketing tools and unified inboxes, giving staff the ability to develop their new #AskATDW initiative - a support channel for the explicit use of their user base.

VISUALISING THE DATA OF THE DATA WAREHOUSE
The reporting was the other major driver of system utilisation. Through the development of a significant amount of reporting, Neighbourhood was able to display unexpected and unplanned value through the visualisation of never before seen data. This experience allowed for significantly quicker data cleaning and optimisation, replacing the need for API-driven reporting, and provided immediate value to ATDW, and their stakeholders. 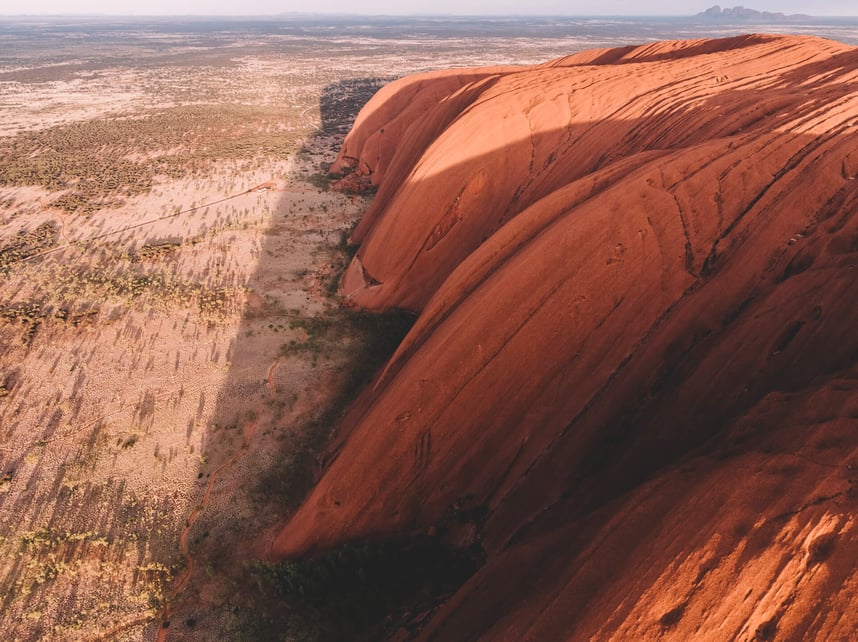 ATDW required a new and intuitive series of processes collated within a single CRM, making the work Neighbourhood conducted a starting line for future reporting and conversion capabilities. The positive effects from the project a myriad, but to highlight a few...

What originally required several software solutions containing over 20 years of data was now integrated into a single platform. Backed by significant API integrations to their data warehouse, an estimated 10% of internal admin time was saved when conducting necessary administrative tasks such as generating reports, reviewing user data or onboarding new distributors.

As part of the reporting sub-project, a total of 246 new reports were created to help STOs holistically track and identify optimisation opportunities for Visitors, Operators and Distributors effortlessly. The ability to cross reference objects through the flexible reporting tools was especially useful, providing dimensions on the data that had previously been hugely complex.

The AskATDW initiative was also a major internal program, with the tools built by Neighbourhood being used to assist in 1500 individual support sessions, leading to a huge boost in Customer experience and positive sentiment.

Beyond data tracking, key stakeholders now have access to communication tools with over 20 email and landing page templates at their disposal, allowing them to interact with their audience more consistently and efficiently than ever before. 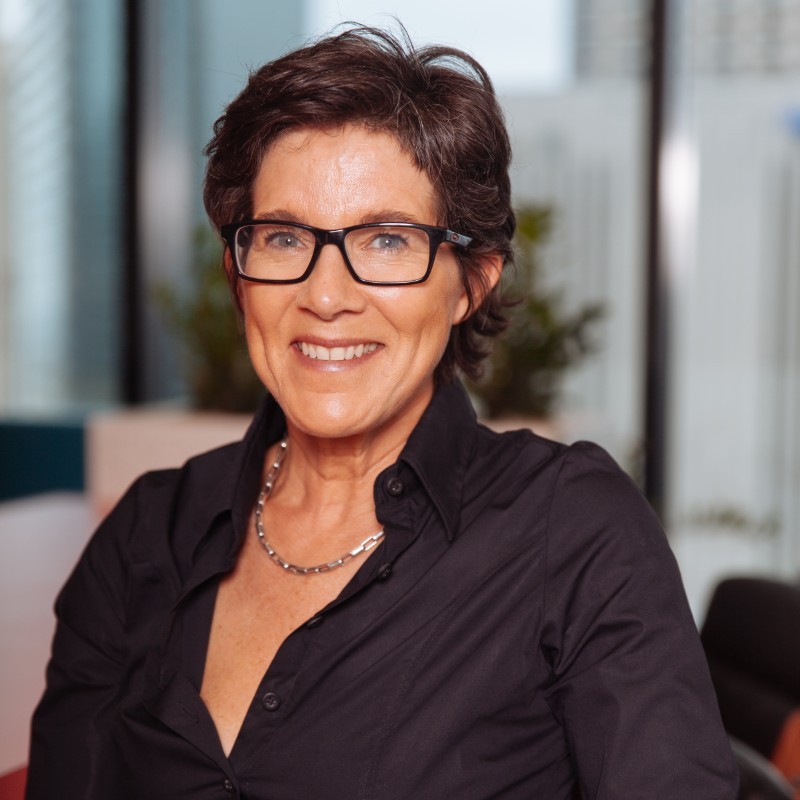 "As the CEO of ATDW, I can unreservedly say that working with NBH has been a game changer for our business. They’re uber smart, refreshingly honest, sincerely committed, highly skilled - and most of all they’re a delight to work with."
JAN HUTTON
LEISURE TRAVEL TOURISM

Being one of the largest projects Neighbourhood has tackled, we're just a little proud of what we could do alongside ATDW. Looking to continue evolving with Hubspot, ATDW is striving for strong content growth to optimise acquisition processes, retention and automation. Utilising the platform for CRO, their next steps are to educate their customer base and provide operators with competitive advantages for how to best use their profiles within Hubspot. With previously scattered data now amalgamated within a single platform, ATDW now has the foundation to support key stakeholders to their optimum. 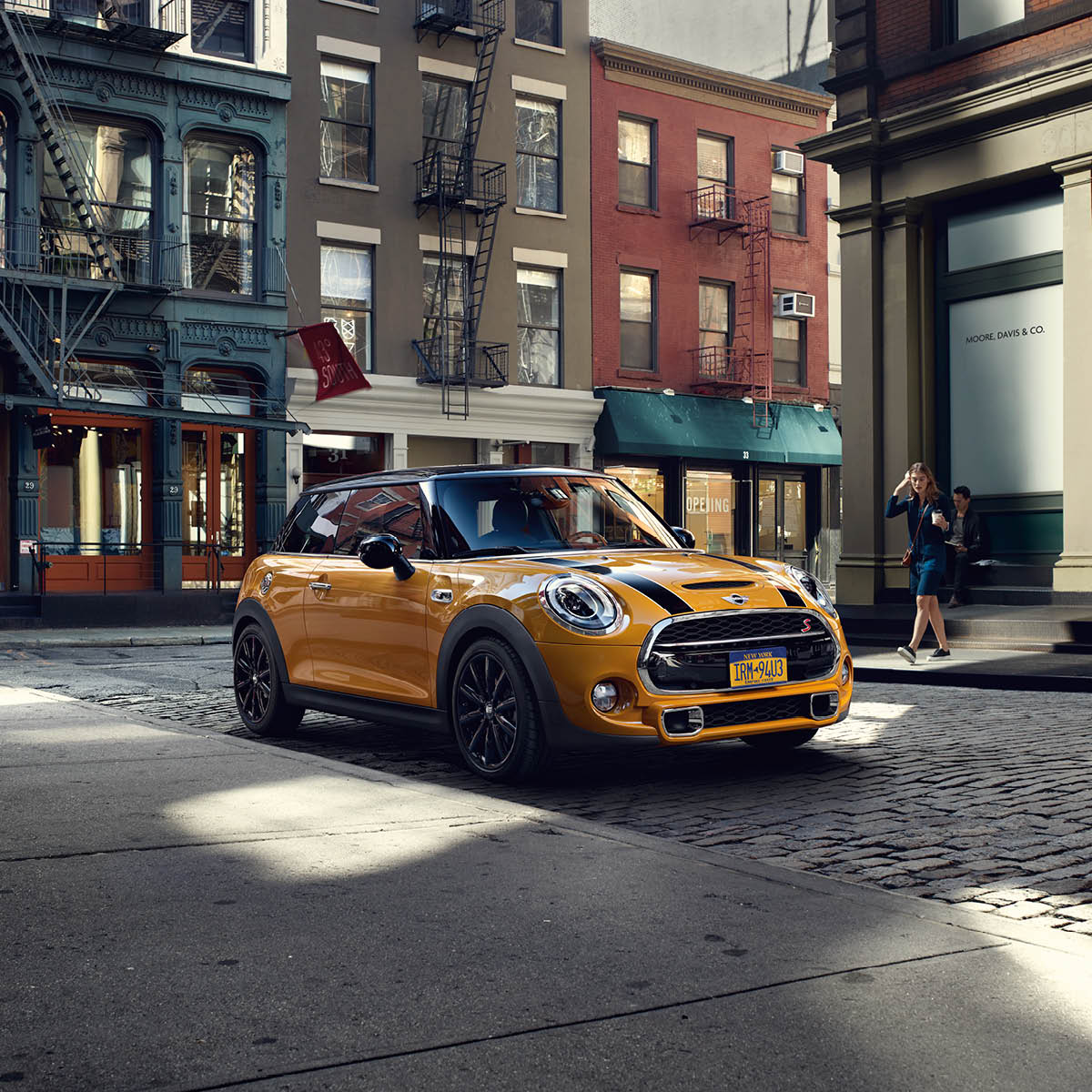 Mini is a British automotive marque, owned by BMW since 2000, and used by them for a range of small cars. Mini is considered an icon of the 1960s British pop-culture movement and you may remember it from any of the Mr. Bean series. Nowadays Mini is about providing luxury and practicality on a small, compact scale. 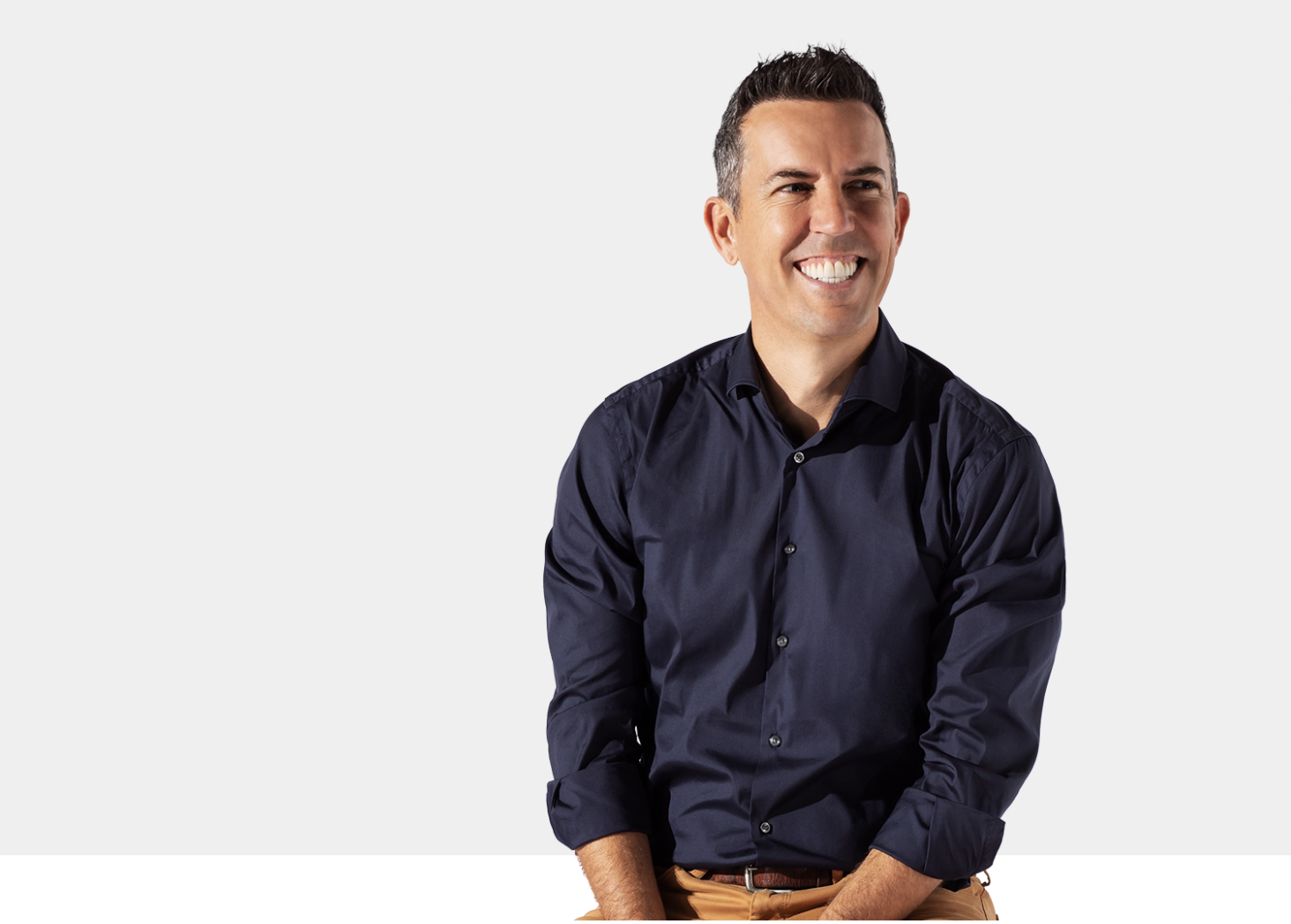 Youspired helps people share their knowledge & capitalise on their craft by providing a live video-based platform. We helped streamline their coach application process and automate their pipelines.