An integral part of digital is marketing the right now. Real-Time Marketing is all about tailoring your marketing to what's happening in the now. We're exposed to branding, advertising and marketing like never before. Usage of social media has sharply risen, time spent on mobile devices has increased and attention spans have lowered (we can't focus for sh*t) which has resulted in consumers being exposed to approximately 10,000 brand messages per day. Given the amount of time people spend on social media, the ways that brands are using it to sell to people are becoming more and more ingrained with the real world, in real-time.

What is Real-Time Marketing?

We scroll faster than ever before, blocking out or moving past ads and messages that we can't relate to or aren't interested in hearing. We see through what marketers are doing and recognise if they are trying to pull the wool over our eyes so it's really no surprise that while real-time marketing can succeed, it also flops harder than the writing of season 8 of Game Of Thrones. Real-time marketing or RTM is a way of standing out amongst the crowd, using what's happening at that moment in pop-culture or the news to be relevant and relatable.

Real-time marketings definition varies a little depending who you ask and that's because it's always evolving, as is the way marketers and brands experiment with how they communicate with you.

Some define RTM as "using data reported instantaneously so marketers can make informed decisions based on information on what’s happening in that moment." That's the more detailed approach but it can be broken down even simpler as delivering the relevant content, to the right people, at the right time.

Have you ever gone online, searched high and low for a product, put it in your cart and then decided against it, leaving the website only to have a banner ad appear on your Facebook a minute later for that exact product you left behind? This is a form of RTM, as is a companies ability to react and deliver content based on real-time events such as Oreo biscuits and their tweet during the Super bowl in 2013, when the entire stadium lost power. 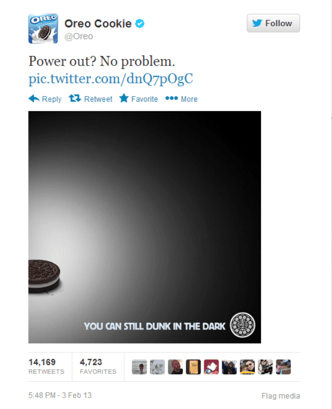 It's piggy-backing off the back of what's happening in the moment to be relevant whether it be an event or an action taken by consumers.

Why should you invest some of your resources into it? What's the big deal?

1. It satisfies our hunger for the now.

We have become a society hungry for instant gratification, wanting responses, information and communication NOW. Real-time marketing is a way of brands satisfying this hunger by giving you the now. The immediacy of the marketing is not just an added bonus anymore, it's a necessity in the eyes of consumers.

Reacting in the moment diversifies your content. Nobody likes seeing the same static content over and over again. Add a little spice to your content, linking it to popular events or providing a small insight to the big things you've got happening right now.

RTM adds a human element to your marketing, and if people can relate to the content you're sharing it helps build trust and in turn, brand loyalty. Giving live insights into your business and what you're working on makes consumers feel a part of what you're doing. In a survey of marketers at leading brands, over half (56 percent) suggested that RTM increases customer satisfaction and positive brand sentiment.

If you're sharing content and getting your brand involved in real-time events you'll be engaging with consumers that are ready to or are already having similar conversations. Speak to them on their level and they'll be happy to engage with you.

5. Keeps you front of mind

It keeps consumers on their buyer's journey even once they've left your website. In the case of the banner ad that follows you from website to website it gently reminders the consumer that you're still here if they need you or change their mind. For behind the scenes Instagram stories, although you may not show off your product and offer a deal, it reminds your followers

The Queensland Police Service often use RTM to share updates on situations, traffic conditions and special events. Using pop-culture and live events happening across Brisbane, the service posts content that engages their followers and as a result, spreads their message further. From road-safety to asking people to avoid parts of the city due to concerts and traffic, they use their social media with real-time content to deliver their message. 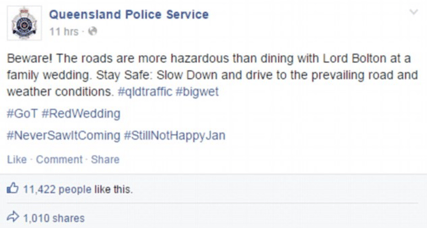 While communicating a message about road safety and using RTM, the Police Service used events from the latest (at the time) episode of Game Of Thrones to help spread their message. If the post had of been purely about road safety it wouldn't have amassed anywhere near the 11,000 likes and thousand shares.

During the 2014 Grammys, singer, Pharrell famously arrived wearing an enormous hat that resembled the Arby's restaurant chain logo (unintentionally). The food chain sent out a tweet asking for their hat back with the hashtag #GRAMMYs which resulted in over 80,000 retweets and close to 50,000 favourites.

When It's Gone Wrong

We all remember the D-U-M-B commercial where Kendall Jenner helped the protesting civilians end a standoff with police by offering an officer a can of Pepsi. Who would have thought, all the cops wanted is a cold can of Pepsi handed to them by a Victoria Secret model to end a stand off?

Pepsi thought they could jump on a movement that everyone was talking about to sell their product. What they stupidly didn't realise, and how the hell did they not realise this, is that people don't like their beliefs trivialised and used as a marketing technique. 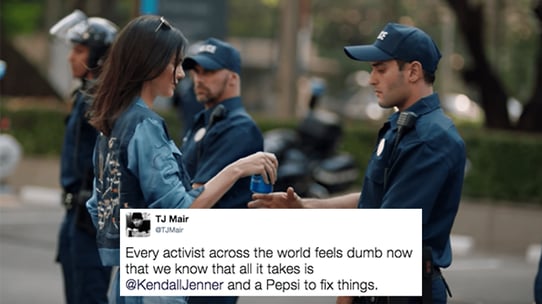 Lesson learnt: Don't belittle peoples beliefs to sell your product. Sure, jump on a movement and support it but don't make light of a serious situation, also, supermodels probably aren't the best authority on political topics.

Real-time marketing shouldn't take the place of a well thought out social media marketing plan, but it does have a place as part of your strategy. It adds a human element to your brand messages and if done right helps build trust and drive engagement. It can be a spur of a moment decision to share content and it could go gang-busters and you could cop high-fives left, right and centre, but post the wrong thing or don't think it through and you could be Kendall Jenner 2.0, and we don't want that for you.

To learn more about real-time marketing or to write your own social media marketing plan, chat with us today!

Chat to us now

How often have you made a purchase purely because you saw it in a window (or more likely, on a website homepage), decided then and there that it ...
read

With the rise of technology, the way we are marketed to has changed drastically. Digital marketing has gone from nice to have in the early 2000's ...
read

<p>Your web browser does not support iframes, which means that the video Inbound: The New Digital Marketing cannot play.</p>     Have you ...
read
What’s next?
Meet the Neighbourhood crew
THIS WAY